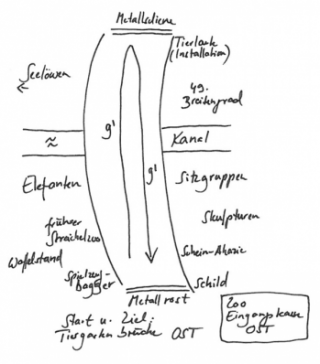 listen to the audio walk

“… Lauscht ihr Ohr nach allen Seiten, sucht nach wild vertrauten Tönen…”
[Their ears listen to all sides, looking for familiar wild sounds.] (from: Joachim Ringelnatz Giraffen im Zoo)
On the footbridge that cuts across the Karlsruhe Zoo, the Berlin composer and sound artist Kirsten Reese has set up an audio trail. Passers-by can access the sound files by using the cameras on their smartphones to take pictures of the QR codes mounted along the way. Alternatively, they can borrow audio players and headphones at the zoo’s east entrance.

Sounds accompany listeners as they walk across the bridge. The composed audio terrain becomes superimposed on the view of “artificial nature” and the animal enclosures in the zoo. In the soundtrack too, artificially generated material mixes with samples of actual animal and natural sounds. The sound files were created with the help of the Fairlight, one of the first digital musical instruments of the late 1970s and the first digital synthesizer that also had sampling technology. The audio trail runs along the border zone between nature and culture at their most extreme – as wilderness. There it encounters the latest in QR code and smartphone technologies.