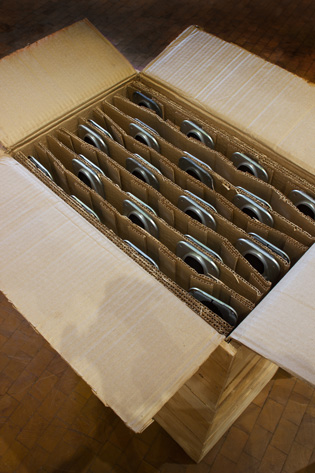 The three coarse wooden crates contain small loudspeakers. Several layers of cardboard protect the loudspeakers during transport. The crates are unlabeled, so where the randomly dumped delivery is going is an open question – to a production hall, or a storeroom?

untitled is one of the first sound installations by the former jazz musician Bram Vreven. The stack of crates gives no visual indication that all 28 loudspeakers are not only functional but also active. To contrast with the muffled cardboard acoustics, Bram Vreven has chosen vivid, clearly contoured sound material. The noises are reminiscent of the sounds and movements of tiny insects. A lively animalistic miniature soundtrack emanates from the loudspeaker chassis and “escapes” from the crates. Here a theme that characterizes almost all of Bram Vreven’s current works is already evident (though as yet immaterial): motion.