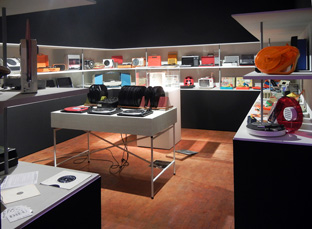 You Are Invited. A Landscape For John Cage & Dick Higgins (2012) – Kalle Laar

The installation plays with the history of the relationship between the LP record and art. Visitors enter a space, listen to Amores I and IV by John Cage and view numerous record players dating from the 1950s to the 1990s in showcases on the wall. In the center of the space there is a table with three record players and a selection of records. In the center, as focal point, a showcase presenting the first recordings of John Cage on LP record appears in an almost sacred light. Two variously sized walls of record covers are located outside the space.

The work to some extent makes reference to John Cage’s 100th birthday: hence, the first, and very rare record edition of the composition Amores I & IV for Prepared Piano, which appeared on the double vinyl record entitled Alan Hovhaness, John Cage: Piano Compositions of 1947 as interpreted by the pianist Maro Ajemian (Disc Company of America 3057/8) was presented. This recording may be heard in the space. Furthermore, the public is invited to created its own mix by means of a freely accessible record player placed on a table within the space, and a random selection of records (without cover), in the tradition of Cage’s landscapes.

At the same time, reference is also made to the origins of this record. It is part of the collection of Fluxus artist Dick Higgins. The Temporary Soundmuseum managed to acquire a part of the latter’s record collection after the latter’s death thanks to the generous support of his wife, Alison Knowles.
Thus, the record covers make reference to the two exterior walls not only to the general history of the relationship between art and vinyl, but also show this on a personal level: in a selection of records from Higgins’ collection.
(Kalle Laar)