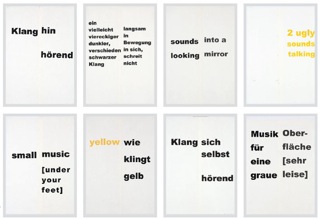 Colors point at something beyond themselves. Commonly, when speaking of chromatic harmony, one refers to the interplay of several colors. However, Rolf Julius enquires into the sound of a single color, and awards to two sounds not only one acoustic interaction, but a visual aspect as well, suggesting that a sound is capable of hearing itself, or asserting a visual and haptically experienceable spatial dimension. He examines relations between an external appearance and its interior sound, and attempts to trace its state. In yellow, wie klingt gelb Julius adds words to poetically vivid, two-part type faces. Only occasionally does he employ yellow type in addition to black type. Even if the observation of his work initially occurs through the sense of vision, it is above all other senses that are addressed. What is seen triggers memories and sentiments, prompts the association of sounds and ultimately causes the experience of a multi-sensorial sensuality.
(Dörte Zbikowski)