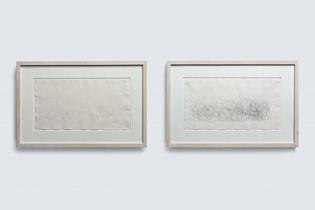 Named after the famous Zen rock garden in Kyoto, Japan, this piece is an excerpt from a series of two-page drawings Cage made by tracing the spaces around 15 stones he chose to represent the stones in the Ryoanji garden. The resulting drawings were then interpreted by an orchestra of twenty musicians as graphic notations for a music performance, with each two-page set of drawings comprising a song to be performed by soloists (representing the rocks in the garden) and percussionists (representing the sand between the rocks). The curves between the rocks were to be interpreted as glissandi by soloists, and their overlapping lines necessitated the use of pre-taped performances in order to fully interpret the piece through virtual duets or trios. These soloist parts were accompanied by a percussion part consisting of only two unspecified sounds, one made with wood and the other with metal
(John Kannenberg)