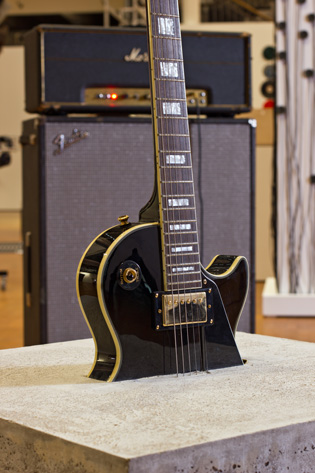 A brand-new electric guitar is half buried in a massive block of concrete. It is plugged in, its cable leads to a massive 1970s amplifier stack that is switched on, turned up, humming and crackling with latent energy: a frozen solo attached to the engine of rock history. It is as if an effort to preserve the instrument has condemned it to a kind of half-life.

Like an homage to the guitar-destroying rock legends Jimi Hendrix or Pete Townsend, the work evokes a lost past in the style of Pompeii. Outside the museum, this instrument has no future.
Douglas Henderson’s works are governed by visual criteria. Trained as a composer, Henderson sees himself first and foremost as a visual artist: “I don’t think that I make music, I’m trying to make sound visible.”