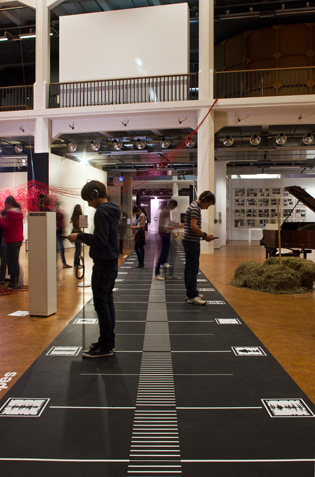 “SoundARt” goes far beyond the installative and sculptural spheres. In seven stations it stages acoustic works in the areas of soundscape, musique concrète, radio art, radioartemobile, intermedium, electronica, and noise in a special way and makes them accessible to visitors. Specialists have curated the individual themes. The seven thematic areas are marked off on a black strip on the floor that connects the two atria of the ZKM | Media Museum and gives the impression of being the display of a radio. Quadratic codes, similar to the well-known QR codes, are fixed to the floor, each work assigned its own code and is imaged as an oscillation graph. Using an iPad, which can be borrowed at the exhibition, the visitor can experience the works, which are made audible and visible as augmented reality in a 3D simulation as soon as the camera of the iPad reads the code. The iPad serves as the pick-up of the radio station and scans the frequency.

The audio stations present central musical currents and historically important works in sound art. Field recordings, which, like photography before them, have become established as an artistic form, have increasingly become the starting point for creative diversity and fundamental to the genre of the soundscape.
The first recordings of sounds and their collage-like processing – by, for example, Walter Ruttmann – quickly revealed the great potential of this new kind of sonority. The composers Pierre Schaeffer and Pierre Henry were theoretical founders of French musique concréte and especially influenced this movement.
Radio discovered the new sounds early on; it created experimental radio plays, so-called acoustic art that used methods similar to electro-acoustic music, and vocal compositional approaches that combined the processing of literature with these practices. Radio was open to various influences: space, architecture, and intermedia, which is why this genre has been given three stations (radio art, radioartemobile, intermedium).
In Noise music not only the emancipation of sounds in twentieth century art music came into effect, but also the Bruitism of the Italian Futurists, the aesthetic reflection of industrial and postindustrial modes of production, and the sheer rebelliousness of the young in the Punk movement.
The term “electronica” was coined in the early 1990s when electronic dance music opened itself to experiment and the avant-garde, and no longer let itself be apostrophized without further ado as “techno” or “electronic dance music.” Today “electronica” designates that kind of electronic music which is committed to the sound design and manner of pop culture and, at the same time, is associated with a certain artistic ambition.