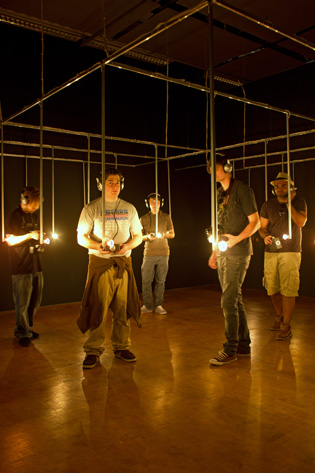 Sound Modulated Light is an installation made of sound and light. Edwin van der Heide works with the flickering of light bulbs whose typical frequency of about 50 Hz is invisible to the human eye. Sound waves alter the intensity of “sound modulated light”. By minimally varying the current, van der Heide composes a dynamic sound-lightfield through which visitors can navigate with special receivers. The receivers are equipped with light sensors and translate the flickering into sounds. Each light bulb has been assigned its own soundtrack. The soundtracks are composed so they can be combined with each other. Moving the light receiver results in different combinations of the composed sounds.