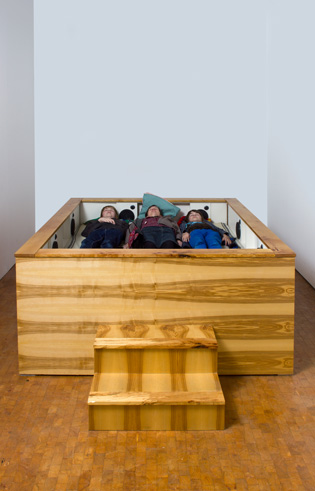 Sonic Bed_Scotland is an instrument to lie in and feel music. The music moves under, over and around your body in ever-changing paths of vibration. Here it plays Bend, an original work Kaffe Matthews composed for the sonic bed using the sounds of her theremin, which she played and processed while lying in the Bed, also moving the theremin around the Bed, as well as Éliane Radigue’s composition Omnht.

Bend can be heard when you stand next to the bed. But visitors who lie down in the instrument will feel it make another sense, becoming an immersive and intimate experience. Sonic Bed is an acoustic and social experiment that explores our perception of sound. It was developed as part of the ongoing research project music for bodies.