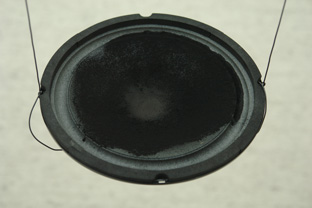 The works of Rolf Julius manifest themselves through the ephemeral. They are conceived with total openness. Openness towards their contexts and in regard to their own shape and design. Julius was fascinated by the idea of „loudspeakers that breathe“. In his piece Singing II two loudspeakers hover freely in the exhibition space, the membranes pointing upwards. A vibration in the membranes is triggered by the quiet composition that is running in the piece, thus causing the sieved pigments on the membranes to dance softly. The fragile-brooding sounds seem to give them life.
(estate rolf julius)