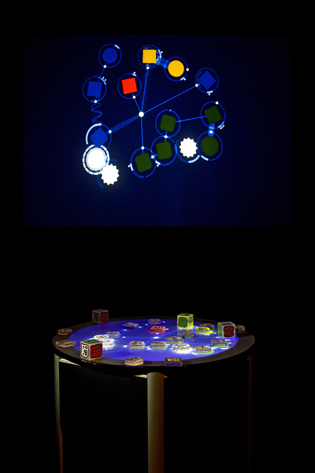 The reacTable is an electronic musical instrument with an interface that transforms sound, rhythm, and music into a visible and palpable experience. By moving, spinning, and creating connections between Plexiglas objects on the table, several persons can play the instrument at the same time. The objects illuminate when played, and their acoustic interaction is visible on the table’s surface. The instrument stands in the tradition of classical modular synthesizers but can also be played intuitively by amateurs.

The reacTable was created by a team of digital musical instrument builders from the Music Technology Group of Pompeu Fabra University in Barcelona. Several international prizes have been awarded to the multi-disciplinary group of scientists, musicians, and designers, including the Prix Ars Electronica Golden Nica, two D&AD Yellow Pencils and the Prize of the City of Barcelona.