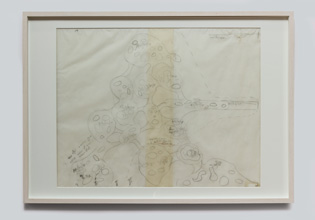 Space for UPIC with Sketches (2012) – Iannis Xenakis and Daniel Teige

From the 1950s onward, Iannis Xenakis pursued the idea of developing a machine that would enable him to liberate himself from the yoke of traditional musical notation.

“In retrospect I would say that drawings flowed easily from my hand back then: my drawings represent musical symbols. But that was not the way to liberate my thinking. I was convinced that music could be written in a different way as well. I began to imagine sound phenomena by drawing: a spiral, interlocking planes …” Iannis Xenakis (1979)

For Xenakis, agogics embraces the totality of notational parameters that serve musical expression. Starting from that premise, Xenakis wanted to create possibilities for combining structures, sounds, and dynamics in a system of signs. This machine was intended to simplify the research for his new methods of composition. But only in 1977, at the research center he founded, the Centre d’Études de Mathématique et Automatique Musicales, or CEMAMu, was the prototype for a machine developed that would bring together drawing, sound synthesis, and music. It was named the UPIC (Unitée Polyagogique Informatique du CEMAMu).

Mycenae Alpha was the first work by Iannis Xenakis to be composed entirely with the UPIC. The composition is one part of Polytope de Mycènes, which was premiered September 2–5, 1978, in the ruins of the fortress of Mycenae. The synthetic sounds of Mycenae Alpha were generated with the aid of the UPIC A prototype developed at the CEMAMu.

This polytope, which Xenakis called “a celebration of light, movement, and music,” was intended to be an amalgamation of the experiences and achievements of his previous multimedia productions with light, sound, space, and architecture (Polytope de Montréal, 1967; Polytope de Cluny, 1971 and 1972; Polytope de Persepolis, 1971; and Diatope 1978).

The music lasts nine minutes and forty-five seconds and consists of eleven pages drawn with the UPIC, one of which is repeated. The exhibited drawings are sketches by Xenakis and are shown here for the first time.