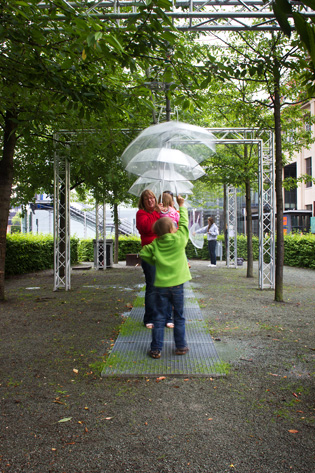 In 1837 the physicist Félix Savart observed that sound vibrations can affect the visual appearance of a jet of water. Subsequent studies determined that the patterns of fluctuations caused by the sound actually reproduce certain aspects of the sound if they fall on a drum.
RainDance builds on this phenomenon of physics to create an interactive and literally immersive sound environment where people can explore “musical” streams of water with umbrellas.

Water is passed through specially designed “modulation nozzles” that impose the vibrations of audio frequencies onto the stream of droplets. For example, 440 vibrations per second results in a stream of 440 water droplets emitted from the nozzle per second. When these droplets fall on a resonant surface such as an umbrella, the tone of A above middle C is reproduced.
In this way various familiar melodies can be reproduced. With different streams, multiple-part harmonies or mixtures of disparate materials can be generated.