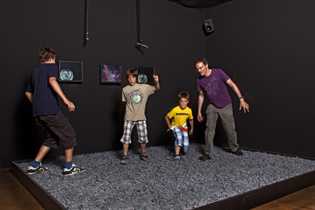 In an alcove in the exhibition area, the floor is covered with gray gravel. Visitors are invited to walk on the field of stones and approach monitors that hang on the opposite wall. When someone treads on the field, a sound arises that transforms the screen images. The pulsing particles, the “supreme particles” of virtual material, transmogrify. Visitors influence the volume and vectors of the visual elements through their footsteps as well as their whispers, speaking, and singing in the vicinity of the screens. A random algorithm and the laws of gravity govern the onscreen motion.

The field of stones symbolizes a radioactive field, the stones can be seen as radioactive waste, the destructive end product of an information society that gorges itself on energy. Human beings similarly transform, living on their own graves only as long as the beating heart generates a pulse. Banished from eternal paradise, and yet in the hands of everlasting godly benevolence.