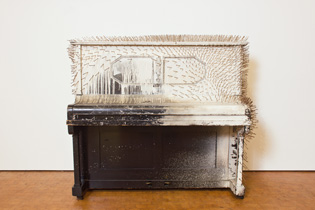 The nail-studded piano was Günther Uecker’s first monumental object: “It became clear to me that people need cult rituals and objects. They washed their cars on Saturday, put TV consoles in their living rooms. And suddenly I wanted my purist structures translated on this objectified cult and consumer world.” To this end, Uecker chose the piano, “European culture’s greatest good.”

At the opening of his solo exhibition in Pianohaus Kohl in Gelsenkirchen (1964), Heinz Mack gave the opening speech, during which Uecker began to hammer nails into a used piano, which he then painted white. The police were summoned but they didn’t intervene; the audience was silent. Since Nam June Paik’s Klavier integral (1963) and Günther Uecker’s Piano, the piano as the fetish and incarnation of academic art and culture has repeatedly been the object of actions by artists, including Joseph Beuys, Wolf Vostell and Rebecca Horn.