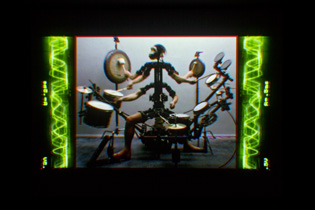 The historic model for the Monkey Drummer is the nineteenth century windup toy monkey. The British filmmaker, video artist, director of music videos, musician, and photographer Chris Cunningham wanted to find a modern equivalent for that drumming automaton: “A specimen from the twenty-first century that drums to something as crazy as a really fast track from Aphex Twin.” Cunningham filmed the drummer of the Icelandic band The Sugarcubes for the Monkey Drummer’s torso and substituted a mechanical torso in postproduction. In this kinetic video study, the monkey’s head apparently controls all nine extremities.