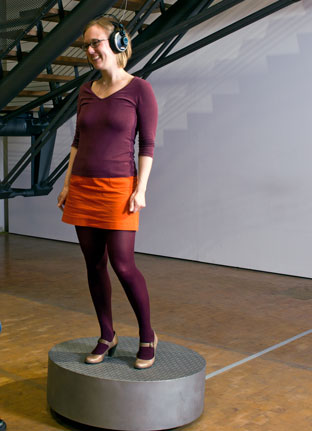 In order to put on the headphones, visitors must climb onto the steel pedestal. With the headphones on, they are isolated from surrounding noises and simultaneously acoustically immersed in a paradoxical experiential space. Via the special headphones and the pedestal, deep frequency sound waves are transmitted directly to the body. These are inaudible to the human ear, yet perceived as pressure. The vibrations evoke the impression of an infinite continually swelling sound-space. While wearing the headphones, the visitor perceives this paradoxical process while simultaneously becoming part of the installation, an observer observed.

The vibrating space is counterpointed by the telephone voice of American artist David Mass. He is heard describing his experiences as a “cage dancer / critic” in modern minimal disco 1, which took place as an installation-performance at the Teutonic Techno Temple rave in San Francisco in 1995.