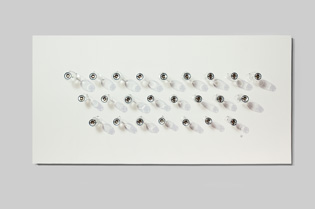 Each of 24 wine glasses has a loudspeaker installed just above its rim. Each glass has a different pitch, which was made to sound for an acoustic recording by rubbing a moist finger around its rim. From these recordings, Scarfe compiled a soundtrack that follows a pattern of “change ringing”, which stipulates that all permutations of tone sequences are played so that no row of tones is repeated. The only exceptions are first and last sequences, in which the tones are arranged in descending order.

In Lenses the same soundtrack plays from each loudspeaker. The sounds are amplified and transformed by the glasses.