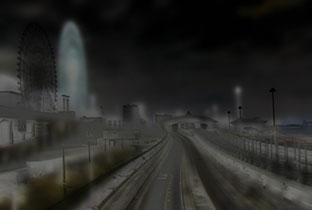 The La Barca cycle consists of 12 audiovisual pieces that were created during my travels to 12 different cities in 2009.
They have later been released as video as well as audio CD and on vinyl.
Each of the 12 works locate a radiance of memories by transforming the residues of the recorded visual and sonic reality into a documentary of the author’s dreamlike perception.
The part that is presented here was filmed and sound recorded during a train ride in Tokyo.
It appeared to me as if the railway car moved like a slow boat, and the announcements at the stations sounded like invocations.
I realized:

„In a barque she sails across the high lands of the past.
The barque heads shimmer and glow at stern and bow,
and that lights her unseeable passage.
She calls to the spirits of this hour,
and that is how we come to even hear her voice.“