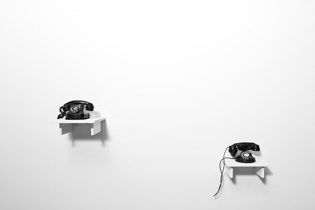 In contrast to their frequently monumental and extensive installations, Janet Cardiff and George Bures Miller turn their attention in this work to the intimacy of speaking on the telephone. In a convent consists of a vintage telephone connected to an iPod. When you pick up the telephone receiver, you hear Janet Cardiff’s voice recounting a dream. The installation is part of a series in which Cardiff and Miller focus on the telephone as a medium for storytelling while simultaneously investigating the narrative potential of dreams.

Further works in the exhibition: