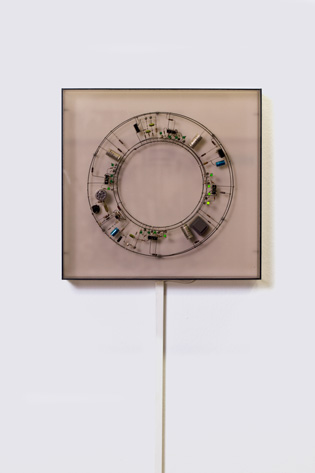 After having studied physics, the artist and performer Peter Vogel was initially involved with brain research. He developed medical devices but also, early on, composed electronic music and designed instruments. Vogel’s sonorous, luminous, and as a rule interactive objects tempt people to play. In his first light objects, illuminated light bulbs functioned only as a signal; later on, the visual aspect gained more significance. Specific formal structures determined the arrangement of the bulbs.

In the sound sculpture Grüne Lichtpunkte, the timing of the light signals reacts directly to acoustic stimuli. With every stimulus, a stable condition is transformed, the lights alternate or the constellation of bulbs changes. Specific acoustic stimuli are assigned to specific luminous reactions. But since the triggering sounds vary in volume, phases get skipped, and so the originally deterministic sequence effectively becomes an aleatory (random) one.

Further works in the exhitbition