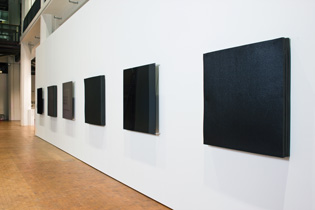 Squares of sound-absorbing and sound-reflecting materials adorn the wall of the exhibition space like a frieze. Aesthetically, they evoke the impression of a post-minimalist visual work. But in fact, the concept behind the work could be described as acoustic intervention. When people walk by the frieze, the acoustics of the room are almost imperceptibly altered.

Peter Ablinger’s weiss / weisslich cycle, begun in 1980, focuses on the perception of minimal differences. It encompasses a series of heterogeneous objects and works that sometimes consist only of a title (walk, and listen to the wind or hold your hand behind your ear/take it away), sometimes are based on notations, but may also involve instrumentalists and/or the audience.