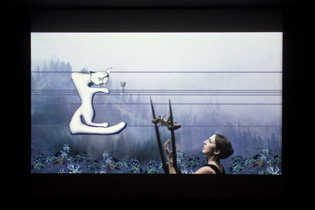 In the First Delphic Hymn to Apollon, video and performance artist Joulia Strauss stages herself with lyre in a fantasy landscape. The recordings were made in the vicinity of Delphi. A series of fantastical animals moves on lines that evoke notation systems. Their names allude to ancient Greek modes. The “Dorian humming cats”, “depressed Lydian minor dogs”, “cathartic Hypolydian division turtles” and “integral swans” appear.

The video is part of a work series of wire sculptures and oil paintings (Second Delphic Hymn to Apollon, 2010) that sounds variations on the theme of “animal mathematical operations” at the intersection of archaeology and art.

Sound sequence: Hymn to the Sun for Hellenic Police