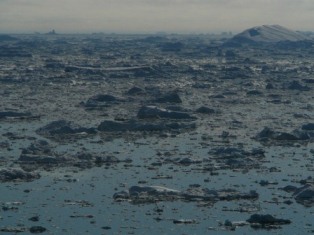 Jana Winderen visited Greenland first time in July 2007 where she did hydrophone recordings 80 metres under the ice and inside the ice itself. The video footage is from the same trip.

Evaporation is the slow vaporisation of a liquid and the reverse of condensation. A type of phase transition, it is the process by which molecules in a liquid state (e.g. water) spontaneously become gaseous (e.g. water vapor). Generally, evaporation can be seen by the gradual disappearance of a liquid from a substance when exposed to a significant volume of gas.
Evaporation, was originally created as a multichannel video installation for the TodaysArt festival, Den Haag (NL) 2009.