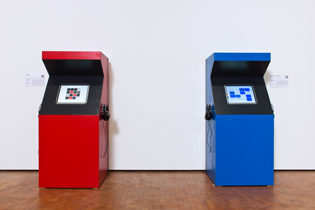 Étude interactive is an installation that constantly restructures itself with the help of chance operations. Ludger Brümmer (composition) and Götz Dipper (concept and visual design) have provided 16 versions for each of the 16 measures in the work. The 16 versions are divided into four groups, each designated by a different color. Each group corresponds to a musical idea: yellow = repetition, blue = scales, turquoise = individual events (single tones and chords), red = polyphony. The musical structures have all been designed using algorithms and share a scheme of pitches that the four groups manifest at different intensities in various constellations.

Étude interactive can also be performed in concert. The concert premiere with the pianist Maki Namekawa took place in the ZKM_Kubus in November 2011. The audience was able to influence the chance mechanism by holding up colored cards to vote on each of the next 16 measures of the piece.