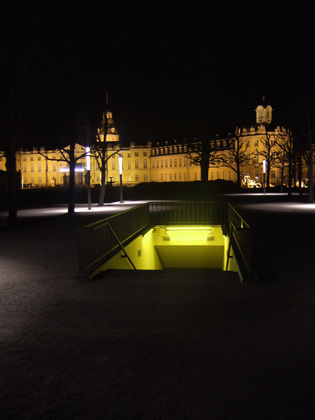 Anchoring this installation of sound and light are two concrete staircases that seem to lead nowhere. From the emergency exits in an underground parking garage emanate two “yellow sounds” that merge in the middle of the space.

An acoustic inventory of the location served as Klein’s source material. From the site-specific sounds he created two abstract 6-channel compositions, which are accompanied by two 3-channel light projections. Georg Klein’s works are often characterized by a single color that, together with a foundation sound, defines the prevailing atmospheric mood of the installation space.
Here Klein evokes the visions of Wassily Kandinsky with two “pure yellow sounds”. Exactly 100 years ago in the almanac Der blaue Reiter, Kandinsky presented his project Der gelbe Klang, in which the “sound of one art [...] supports the identical sound of another art.”