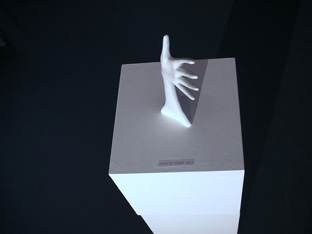 An exasperating electronic decomposition of speech or any other sound produced by
the user.

To disintegrate the fluid consequentiality of spoken language.
To neutralize the common linear logic by making a synthesis of chaotic phonetic segments.
Words as disjointed and broken fragments.
This as a consequence of the electronic process that acts on the continuity of linear discourse in a “destructive” way.
Expressions deconstructed through a new ephemeral but, at the same time emotional dialectic.
An illogical and discontinuous information flow… in a relative time.
(LOXOSconcept)