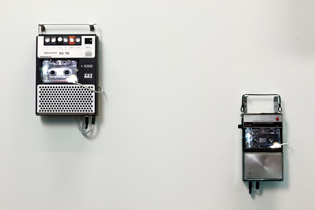 Stephen Cornford works with used portable audiocassette players. But there is no tape in the cassettes he plays in the devices. Instead, contact microphones amplify the sounds of the recorders themselves. The sound of Binatone Galaxy derives solely from the sound of the motors and mechanisms. Movement sensors that control whether or not the devices temporarily pause are also built into the cassettes. In his works, Stephen Cornford uses for the most part analog audio technology and acoustic musical instruments. In Binatone Galaxy he resurrects the superannuated medium of a generation without summoning up the musical messages it once conveyed. The installation takes its name from a certain model of British cassette recorder.