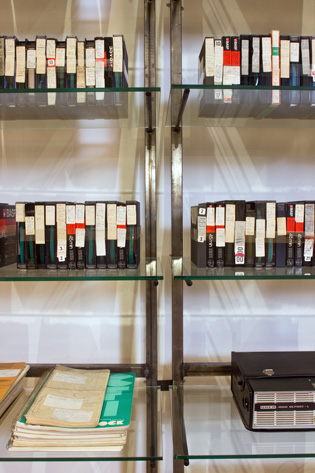 Opera singer, philosopher and documentary filmmaker Friedrich Jürgenson was the discoverer of electronic voice phenomenon (EVP). While recording his voice in 1959, he came upon strange artifacts in the tape signal that he eventually recognized as voices speaking in a variety of languages. After making many such recordings, one of the voices suggested to Jürgenson to use radiowaves in his research. He left behind a large archive of audio recordings and other research related to trans-communication, the study of the voices of the dead.

The artist Carl Michael von Hausswolff has been working with the Jürgenson archive for several years, using its contents as source material for installations in the series Radar Works, an absurd archive exploring his shared quest for contacting intermediate realms.
(John Kannenberg)