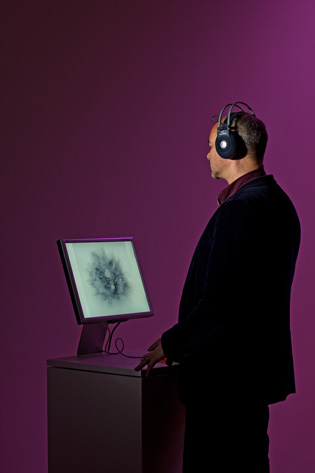 Windjammer, poodle or deadcat: the jargon of sound engineers has many names for the wind shield made of long-haired fur that makes it possible to record with the microphone even under extreme wind conditions. Timo Kahlen takes the image of sound filtering as the starting point for his interactive sound work. Audio Dust makes audible the incidental and interfering noises that a wind shield absorbs. Our attention shifts from the microphone to the “audio dust” in the thicket of fur.

The invisible depositions become audible when the visitor moves the computer mouse over the image. Static and mobile sound fragments form multilayered gritty, creaking, buzzing and rustling microcosms that arise according to the direction, speed and stationary time of the mouse as it is rolled and clicked on the touch-sensitive sound surface.