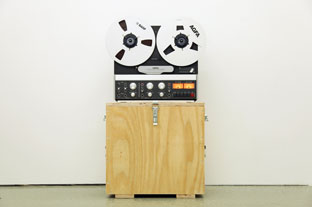 abwicklung consists of a tape machine that is equipped with one BASF and one Agfa reel. What one hears is a four-tone modulation that – as the tapes “unwind” – takes its cue from the sine tones B-A-Es-F or A-G-F-A. The duration of this process is based on the length of the magnetic tape and a tape speed of 19cm/sec.

The sonification/visualization of a transaction that happened twice in the history of the two companies takes place within the time span of an average feature film. Four tones and 1100 m of tape speak of avant-garde utopias situated in a field of tension between (ostensible) artistic autonomy, so-called technical progress, and economic interests.

Further works in the exhibitions