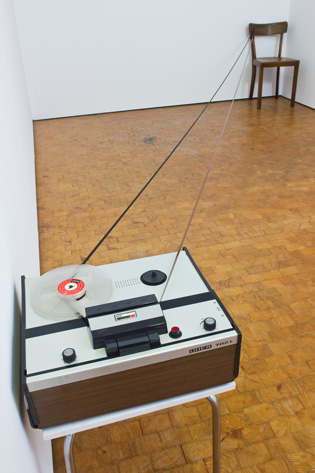 In July 1968 Bruce Nauman designed Six Sound Problems for the Düsseldorf Galerie Konrad Fischer. For four weeks he played a different tape every day the gallery was open. The sound events were related to the exhibition venue and were recorded there: on Mondays the sounds of footsteps, Tuesdays two balls, Wednesdays the sounds of his violin, Thursdays footsteps and balls, Fridays footsteps and sounds of the violin, and Saturdays sounds of the violin and balls.

The tapes are stretched like a ribbon between the tape player and a pencil attached to a chair. The title indicates that the work deals not only with documenting everyday site-specific sounds and their possible permutations. Nauman presents the recordings as a discursive riddle. The sounds labeled as problems beg for solutions, without any concrete questions having been formulated.

Monday – Walking in the gallery.

Wednesday – Violin sounds in the gallery.